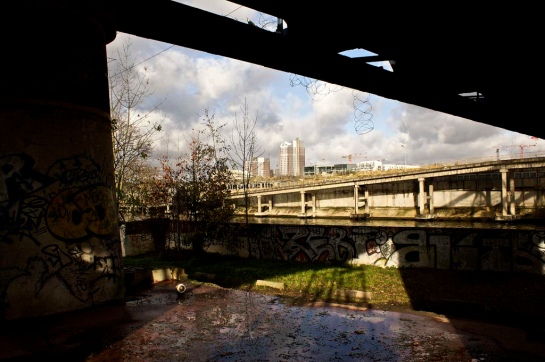 The work that occupied the last years of Jed Martin’s life can thus be seen – and this is the first interpretation that springs to mind – as a nostalgic meditation on the end of the Industrial Age in Europe, and, more generally, on the perishable and transitory nature of any human industry. This interpretation is, however, inadequate when one tries to make sense of the unease that grips us on seeing those pathetic Playmobil-type little figurines, lost in the middle of an abstract and immense futurist city, a city which itself crumbles and falls apart, then seems gradually to be scattered across the immense vegetation extending to infinity. That feeling of desolation, too, that takes hold of us as the portraits of the human beings who had accompanied Jed Martin through his earthly life fall apart under the impact of bad weather, then decompose and disappear, seeming in the last videos to make themselves symbols of the generalized annihilation of the human species. They sink and seem for an instant to put up a struggle, before being suffocated by the superimposed layers of plants. Then everything becomes calm. There remains only the grass swaying in the wind. The triumph of vegetation is total.

“…Anyway, the press is unbearably stupid and conformist, don’t you find?” he insisted.
“I don’t know, really, I don’t read it.”
“You’ve never opened a newspaper?”
“Yes, probably,” Jed said good-naturedly, but in fact he had no memory of ever doing so. He managed to visualize piles of Le Figaro Magazine on a coffee table, in his dentist’s waiting room; but his dental problems had been solved a long time ago. In any case, he never _felt the need_ to buy a newspaper. In Paris the atmosphere is saturated with information. Whether you like it or not, you see the headlines in the kiosks, you hear conversations in the supermarket lines. When he went up to Creuse for his grandmother’s funeral, he’d realized that the atmosphere density of information diminished considerably the farther you got away from the capital; and that, more generally, human affairs lost their importance and gradually everything disappeared, except plants.

From Michel Houellebecq’s The Map and the Territory, pp. 89-90