In one of his masterpieces, H.P. Lovecraft recounts the story of Randolph Carter, who feels his “self” reel and who experiences a fear worse than that of annihilation: “Carters of forms both human and non-human, vertebrate and invertebrate, conscious and mindless, animal and vegetable. And more there were Carters having nothing in common with earthly life, but moving outrageously amidst backgrounds of other planets and systems and galaxies and cosmic continua…Merging with nothingness is peaceful oblivion; but to be aware of existence and yet to know that one is no longer a definite being distinguished from other beings,” nor from all of the becomings running through us, “that is the nameless summit of agony and dread.” Hofmannsthal, or rather Lord Chandos, becomes fascinated with a “people” of dying rats, and it is him, through him, in the interstices of his disrupted self that the “soul of the animal bares its teeth at the monstrous fate”: not pity, but unnatural participation. But then a strange imperative wells up in him: either stop writing, or write like a rat…If the writer is a sorcerer, it is because writing is a becoming, writings is traversed by strange becomings that are not becomings-writer, but becomings-rat, becomings-insect, becomings-wolf, etc. We will have to explain why. Many suicides by writers are explained by these unnatural participations, these unnatural nuptials. Writers are sorcerers because they experience the animal as the only population before which they are responsible in principle. The German pre-romantic Karl Philipp Mortiz feels responsible in principle not for the calves that die but before the calves that die and give him the incredible feeling of an unknown Nature – affect. For the affect is not a personal feeling, nor is it a characteristic; it is the effectuation of a power of the pack that throws the self into upheaval and makes it reel. Who has no known the violence of these animal sequences, which uproot one from humanity, if only for an instant, making one scrape at one’s bread like  a rodent or giving one the yellow eyes of a feline? A fearsome involution calling us toward unheard-of becomings. These are not regressions, although fragments of regression, sequences of regression may enter in. 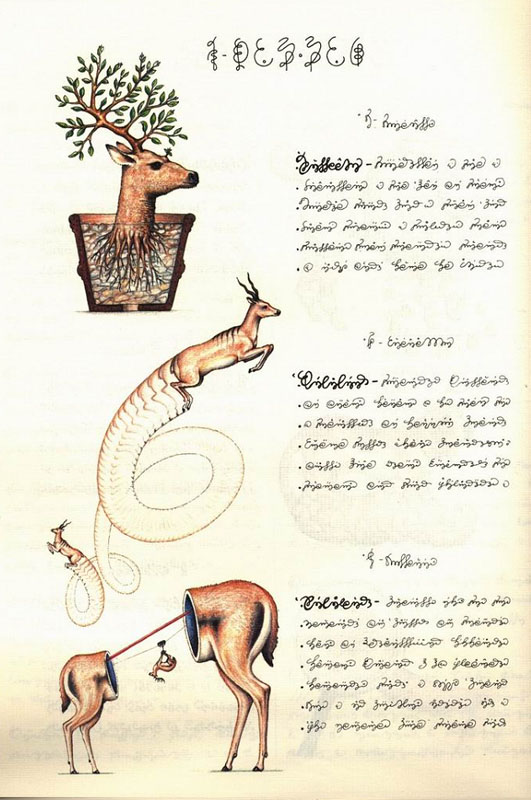 From Luigi Serafini’s Codex Seraphinianus (With thanks to Dara Blumenthal for sending!)